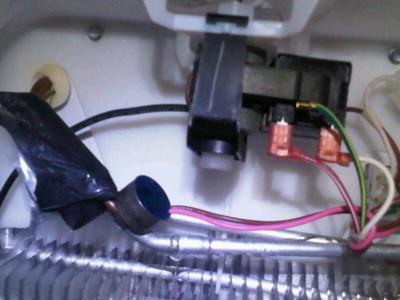 I have a KitchenAid KSCS27QFWH01, side by side doors seperating Freezer from Refrigerator.

This past week the refrigerator portion is not cooling properly. Properly means temperature is fluctuating greatly, up to 45 degrees and some moisture condensation in refrigerator, occurs when door being used regularly, but will cool back down overnight. (This is noticably different than previous operation).

Fan underneath is operating, compressor operating. Though it seems to be on a very long time now.

Check fan in freezer, this is operating. After opening back freezer panel to check coils, 65% of coils quite free of frost, lower 1/4 of coils had some frost.

Per your guide, checked what I think to be thermostat (checked the wire side) for continuity, found the Ohm Meter when from one to zero. After plugging back in, the defroster heater kicked on, but cannot say that I observed it operating prior, though coils looked okay.

When poking around on the refrigerator side last week, heard a click and the air flow at top back of refrigerator increased substantially. Since then, airflow is low again.

Question - is there a valve in the Diffuser that opens and closes? If so, what controls it? Any way to test it?

When moving the Coldness Slider for the Refrigerator, it does not seem to accompish anything at this time, i.e. turning on or off the refrigerator, is it supposed to do this?

Any suggestions or additional tests to trace down the cause?

Now turn both controls all the way on (coldest). The damper should open, the fans should run and the compressor should be running. If not the damper or the thermostats are bad. Note that this will not work if the refrigerator is in defrost so if it doesn’t work try it again later just in case it was in defrost.

What concerns me the most is this…

Quote “After opening back freezer panel to check coils, 65% of coils quite free of frost, lower 1/4 of coils had some frost.”

This is not a good thing at all. What you should see if everything is working properly is a thin layer of frost along the entire set of coils. This is what is known as the frost line and what you are describing is a low frost line. However if the door has been opened for a while the frost line will move down the coils. What you should do is take the back of the freezer off again, close the freezer door and let the refrigerator run for a half hour or so. If you do this and the frost line is still only 25% up then I would say you have a refrigeration problem. This could be a bad compressor, clogged refrigeration line or low on gas. A refrigeration problem isn’t a do-it-yourself job because you need special equipment to do the job as it should be done.

I hope this helps!