If your GE spacemaker microwave is a 1600 series (the numbers in the model number are between 1600 and 1699) you must replace the magnetron/stirrer kit- part number WB27X10489 you can order it at This kit can be purchased at AppliancePartsPros.com.Just click on the link and enter that part number. If it is not a 1600 series you will have to order by model just click on the link and enter your model number.

The first thing you must do is take the microwave down from the cabinet. To do so follow these steps. 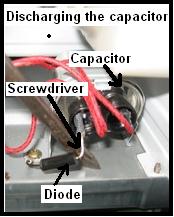 Taking Down The Microwave

1. Unplug the microwave and remove the turntable.

2. Have someone hold the microwave up while you remove the three bolts (some installers only use two) pointing downward from the top of the cabinet.

3. Once out the microwave should lean forward and at this point pull the cord through the hole.

Note that if you have an early GE spacemaker microwave it may not lean forward. In which case, try to slide it straight forward. If it will not slide forward remove the front grill and look on each end for a long bolt (going all the way through the microwave) that holds the microwave to the back wall.

4. Once the microwave is leaning out you can lift it up and off the bracket on the lower back wall.

Once the microwave is down you can begin replacing the magnetron tube. Follow these steps to do so. 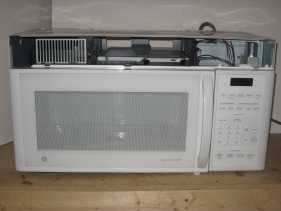 2. Remove the control panel and turn it sideways. 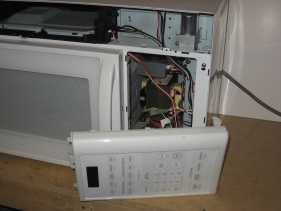 4. Pull the case off just enough to unplug the cord and disconnect the ground wire. Then completely remove the case. 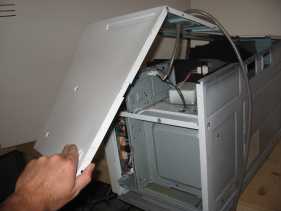 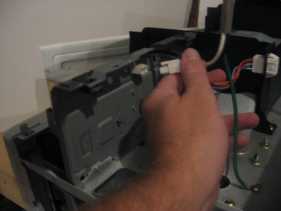 5. Remove the three screws on the back. 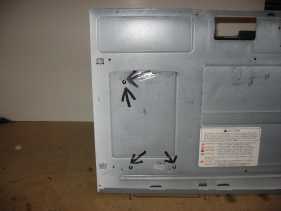 6. Remove cover off side as shown. 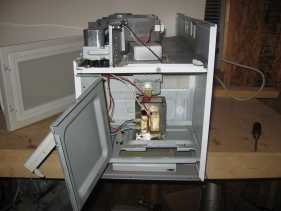 8. Remove the magnetron tube limiter (thermostat on side of magnetron).

9. On the back of the microwave there are two screws that hold the plate that the transformer is mounted to which you removed in step 4. Those screws were removed to allow you to push the plate down, which allow the magnetron tube room to drop down and out past the transformer.

10. Remove the magnetron tube by removing the nuts on top of the housing. You may have to press down on the transformer so that the magnetron will have room to clear.

11. Install the new magnetron tube making sure the wire terminals are pointing outward. 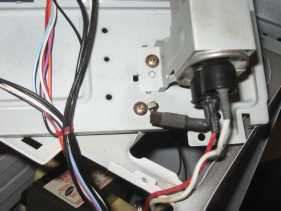 If your microwave is a 1600 series you will have to replace the stirrer, which is located inside the microwave at the top, straight above the turntable. Remove the cover by removing the little clip that holds it on and the stirrer will fall right out. Replace it with the stirrer provided in the kit. 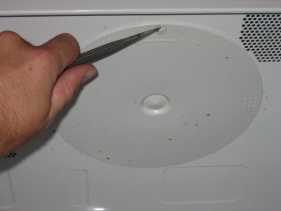 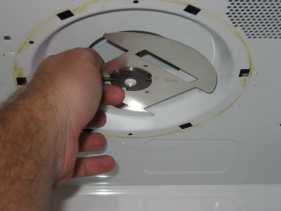